Effective exploration beneath covered terrains places some common demands on all indirect methods. MIMEX has developed a combination of hardware (MIMDAS) and software that addresses these requirements. Examples of the application of these methods are given.

To successfully explore for totally covered deposits, at some time use will be made of one or a number of indirect methods to infer subsurface properties. Geophysical and geochemical exploration surveys are common in these environments. As the amount of cover increases in both the vertical and horizontal dimensions, the common requirements for any exploration method are:

1) As the targets get deeper the signals get smaller, quickly, requiring the measurements to be accurate and reliable

2) At times the areas to be explored are very large requiring the measurements to be affordable to make.

3) It is essential that some model that reflects physical reality be derivable from the measurements taken and that this model can be used in exploration. The measurements must be interpretable

In the field of electrical geophysics there has been a growing realization that the way to achieve these aims is to develop new instrumentation and to deploy it in the multichannel array styles in a manner that has become commonplace in the seismic method. To complement the new hardware that is capable of resolving smaller signals is the vast reserve of signal processing software largely developed for use in other disciplines to improve signal to noise ratios.

Over recent yeas a number of developments have been made that meet at least some of these requirements. For example ARTEMIS a GeoInstrument electromagnetic time domain system which has intelligent receivers, without interconnection, that collect data at remote sites. The receivers are harvested at the completion of transmission for processing. There is also the MT24 an magnetotelluric system manufactured by EMI which is a distributed system having batches of multichannel boxes connected via a cable to a central unit.

The approach adopted at M.I.M. Exploration Pty Ltd (MIMEX) in 1994 was to design and build a multichannel aquisition system to collect measurements that are accurate and affordable and at the same time pursue the required interpretational and display tools. This has resulted in products which allow a 3D style interpretation. The ultimate goal was to produce 3D geology maps interpreted from 3D discretized physical property block models. While achievable the 3D interpretive schemes are not widely available. However, in certain instances very usable models have been assembled from 2D interpretaions dispayed in a 3D sense.

The hardware for the system was built in conjunction with Refraction Technology. It has been named MIMDAS  MIM Distributed Acquisition System and was designed to be used to collect array style measurements using any commonly available sensor type. MIMDAS has to date been used to collect controlled source electromagnetic data, resistivity and induced polarization data including spectral IP, and magnetotelluric data. The system is sufficiently flexible that it could collect other data sets such as seismic if required.

The system is based upon single channel distributed acquisition units (DAUs) that collect 19/24 bits (depending on sampling frequency) of non-aliased linear data with a band width of 0 – 20 kHz. This data is relayed to central recording unit (CRU) in a recording truck, via local area network (LAN) cables. Each distributed acquisition box is accurately synchronized and the data buffered in each unit is transmitted to the CRU at the end of each event. The acquisition software allows interrogation of each box and can display raw data as it arrives. The data is processed on site and field plots produced. One value of recording and storing complete time-series data is that it allows re-processing at later times. For controlled source surveys at least one channel is devoted to accurately monitoring the input current from the transmitting source. This current data is then used to deconvolve the input data and compensate for non-ideal transmitted waveforms.

The distributed system avoids multiplicity of cables attached to sensors and the inherent capacitative coupling problems. It also means expandability as the number of units/sensors is limited only by logistics, and the nember of available DAUs. The data from each channel is collected simultaneously which offers considerable noise cancellation benefits. The time series data allows simple signal processing procedures to remove cultural noise, which when combined with selective stacking routines and other remote reference noise cancellation schemes produces very high quality data. Considerable area or line kilometers of quality data can be captured rapidly.

The following examples illustrate various aspects of the three major requirements outlined above.

A Magnetotellurics survey was conducted north of the Mt Isa Cu, Pb, Zn, Ag mine in NW Queensland, Australia. The aim of the survey was to investigate down to a depth of 1500m for additional Pb/Zn mineralization.

Eight lines of data, 3km long and separated by 500m were collected using a continuous profiling method. Mainly TM (across strike) dipoles every 100m were used, supplemented with less frequent TE (along strike) measurements. The inverted 2D conductivity sections were stitched together to form a 3D block model as shown in Figure 1.

Figure 1 Conductivity block model looking north. (7 x 3 km). On the left a depth slice at 500m, on the right a vertical slice is shown.

The 3D display in figure 1 is a common way of displaying data sets with many well constrained points eg mine plans etc. With magnetotelluric data collected with standard techniques i.e. less dense coverage the display would be somewhat meaningless. With good surface coverage and sufficient frequency collection at each node an acceptable 3D physical property map can be produced. This enhances the interpretability of the data.

Conventional Induced polarization systems are generally limited by the number of channels that can be deployed simultaneously. This effectively limits the number of n-spacings that can cost effecively be collected which in turn restricts the depth of investigation. With MIMDAS the usual mode of operation is to lay out enough channels to cover the entire line, all at the one time. In this way the ultimate n-spacing collected depends upon line length, with for example n=40 being collected for a 4km line at no extra operational effort and cost. 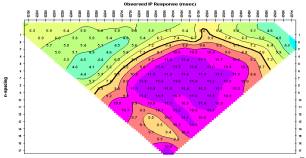 An example of data collected 300m south the Ernest Henry Copper/Gold pit in NW Queensland is shown in figure 2.

Figure 2. Chargeability data on the left collected to n=18 and an inversion on the right

This data was collected to n=18 only due to space limitations on the mining lease. Collecting IP data out to an n of 18 under approximately 75m of conductive cover requires the detection of an IP signal in the presence of EM coupling that can be three orders of magnitude or more greater. The inversion clearly shows that this has been achieved by showing a well defined chargeable source at 200m below surface that correlates almost perfectly the ore horizon.

This example demonstrates how effective inverse modelling can be. The observed IP data in fig 3a is form Brescianini et al., 1992. The published interpretation,derived from a mixture of forward modelling and inferences from the observed data was that the IP represented a zone of significant width (800m) and not directly correlatable with the mineralization. The results from the 2D inversion of the data (fig 3b) however, clearly show a more discrete body coincident with the discovery hole, END 17. There is even an indication of what may be Eloise east some 450m in that direction.

Fig 3a Plot of apparent chargeability, line 82550N.Units are miliradians

An essential part in the whole process is the generation and effective display of the 3D or 3D like physical property images. This is the first step in a process that can ultimately result in the integration of a whole range of geological,geochemical and geophysical knowledge.This will lead to more effective targeting and exploration of these terraines. Ultimately when the confidence in geophysics is increased it should lead to the time when an explorer could leave a prospect without drilling sure in the knowledge that nothing has been missed.