RE-ACCESSING NEAR MINE MINERAL RESOURCES

Hilton mine is located 22km north of Mount Isa in northwest Queensland. The mine is directly along strike between the George Fisher mine, 2km north, and the Isa Mine, 22km south. Recent exploration efforts have focussed on the area between the Isa Mine and Hilton and to the north of George Fisher. The near mine mineral resource has not been worked on for a number of years, with the result that there are significant areas adjacent to the Hilton and George Fisher deposits that are not closed off. The edge of economic mineralisation needs to be defined for the development and production designs to maximise the extraction of the deposit. This requires more geological data to be collected and interpreted.

The Hilton mine is a stratiform Proterozoic zinc, lead and silver deposit hosted by the Urquhart Shale Member of the Mount Isa Group within the Mount Isa Inlier (Figure 1). The deposit lies along strike between the George Fisher mine, 2km to the north, and the Isa Mine, 22km to the south. 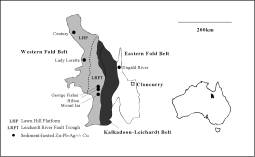 Since 1989, the Hilton mine has been a major producer of lead-zinc ore for the Mount Isa Mines group. The Ore Reserves inventory has been large enough to fill an eight year plus production schedule without having to rely on any ongoing exploration and further definition of the peripheral Mineral resource.

The recent Lead-Zinc Study, which assessed all available and potential mineral resources in the Hilton and George Fisher area, indicated that there was the potential to extract significant additional ore reserves from Hilton mine area. The study had focused on maximising value from the existing MIM lead-zinc processing facilities. Given the available capacity in the concentrator, smelter and refineries, the study recommended that production from Hilton mine be continued to exploit these additional reserves and initiate a program of work to convert the remaining mineral resource.

As most of the Initial Mine Block (IMB) in Hilton has been mined, the focus for current diamond drilling programs is on converting peripheral mineralisation to ore reserve. (Figure 2.) 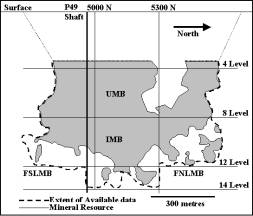 The profile of mine planning has increased as attempts are made to maximise exploitation of the deposit. Peripheral parts of the deposit are now being regarded as potential sources of ore and any mining activity adjacent to them must be planned to minimise the possibility of sterilisation. This has highlighted the need for near mining area data collection to define the limits of economic mineralisation.

Past Practices and Present Predicaments

Mine feasibility plans and production schedules are used to justify capital expenditure on infrastructure and development. They present a plan that is robust enough to be bankable if outside finance is needed, and as a result, concentrate on the highest value mineralisation. This is the best strategy when trying to start a mine, particularly if operating factors such as metal prices and exchange rates are unfavourable. The logic often used by feasibility teams is that the higher the Net Present Value (NPV), the more assured they are of obtaining the necessary funding to launch the project. Leaving the lower value ore out of the short-term schedule maximises the NPV of the project and makes it more attractive to the general investing market and provides a faster payback.

As a consequence of initial mine plans focusing on the highest margin material, some of the near mine mineralised extensions can’t be investigated to a level of detail to allow Mineral resource definition and publication. The end result is that the near mine potential is set aside for drilling and development at some stage in the future without any firm plans having being drafted.

Once a mine is in production and the requirement that scheduled tonnes be produced is implemented, the focus on cost cutting increases, and the near-mine exploration becomes a low priority. Mineralisation immediately adjacent to the published Mineral Resources and Ore Reserves is not developed and opportunities to exploit this resource reduce as the mining progresses. The fact that sufficient ore reserves are available and production is scheduled for many years combined with the fact that the mine geologist is often focussed on day to day stope definition and grade control can lead to the near mine potential not being considered as an ore source. The data gathered at the start of the project is often the only data that is available in those near mine areas.

Experience shows us that once drilled, there is often mineralisation requiring evaluation outside the extent of mining. This can be the result of mining methods, cut-off values and costs changing during the life of a mine.

As a stope or bench design can only occur within the limit of the Ore Reserve, the mine engineer can only design to that limit. If the mineral resource used to derive the Ore Reserve is not adequately closed off due to lack of data, there is a possibility that at some stage in the future, further development will be required to re-access the mineral resource. This costs the mine in terms of additional development and drilling and also in terms of lost production time from the area. i.e. Good mine design is compromised through lack of having definite well-defined economic mineralisation boundaries.

The main aim of the exploration program around the Hilton orebody is to discover another large copper orebody similar to the existing copper deposits at Mount Isa. Any significant lead-zinc deposit found would be considered a bonus. However these targets are well away from current mining areas and there is little exploration focus in the areas immediately adjacent to the existing mines.

Where no data is available, the questions regarding the economic limit of the mineral resource are the hard ones for a mine geologist to answer. The lack of available data makes any definite answer difficult.

Where the prospective area with limited data is adjacent to mined out or depleted mineral resources, it is often sterilised due to lack of access. In this case re-access is often expensive and time-consuming. The mine geologist must produce an interpretation of the area and estimate the mineral resource so that the mine engineer can produce re-access development plans and production schedules to mine the area.

In order for the mine geologist to be able to produce an interpretation and mineral resource estimate for the area, more data is required.

The usual method for increasing knowledge of an orebody is to diamond drill. In some cases it is possible to diamond drill from an existing drilling platform such as an exploration drill drive. Unfortunately it is often the case that access to any existing exploration drill drive has been lost. For example it may have been used as a sump or has been barricaded off and neglected for many years. Regaining access to these drives can be a costly and difficult exercise.

Often there is no existing diamond drill drive to use, so alternative diamond drilling sites need to be found. As the diamond drilling targets are usually peripheral to the main part of the orebody, there is usually no development that can be utilised as a diamond drilling platform. This leaves the options of developing a new exploration drill drive or extending an existing one. Either case is expensive and without knowing what the mineral resource is going to return in the way of tonnes and grade, it can be very difficult to get approval to spend capital on the exploration drill drive. The peripheral parts of the orebody are generally not thought to be as high value as the existing defined resource.

Many of the points previously discussed are demonstrated by the example of the Far South Lower Mine Block (FSLMB) at Hilton Mine. (Figure 2.) Production from the last remaining Ore Reserves in the area was scheduled for 2001-2002.

The development designs and production schedules were prepared by the mine planning engineer and given to the mine geologist for checking and approval. A revision of the geological interpretation indicated that mineralisation could be expected beyond the planned production limits. However there was no data available to substantiate the interpretation. As a result the mine geologist was not comfortable with the designed extent of the development and asked for the drives to be extended so as to investigate the potential for extensions to the mineral resource.

Production from the FSLMB has been postponed until the extremities can be more confidently modelled. As the only possible drilling platforms do not extend far enough to the south, development plans have been drawn up to develop a dedicated diamond drilling drive to the south in the hangingwall of the interpreted ore bearing horizons. This additional data will allow a more definitive economic limit to the mineralisation.

The postponing of production from the FSLMB resulted in a shortfall of tonnes in the production schedule. The shortfall of tonnes has been compensated for to some degree by using sources from other areas of the mine. This has placed increased pressures on these mining areas in which mineral resource extension programs are also in progress. It has also placed a high priority on the timely development and diamond drilling of the FSLMB. This program needs to be completed as soon as possible so that production in the FSLMB can resume.

Because there is a pressing need to restart production in the FSLMB, there will be a great deal of pressure on the mine geologist to incorporate the new data into the geological models without delay.

Geological Interpretations are only as good as the data and the time available to interpret them properly.

The results of a less accurate geological interpretation being used to produce a production design can be disastrous. A range of consequences could result, from designing the bench or stope in the wrong place to severe falls of ground, both producing excessive dilution.

The mine design or extraction sequence for an orebody is often not flexible enough to cope with a late change to the geological interpretation. This can mean that the extraction design is forced, due to adjacent extraction interdependencies, to either leave ore in the ground or to take unnecessary dilution, neither of which is a profitable outcome.

The process of defining the economic boundary of mineralisation at Hilton is demonstrating the need for more mineral resource definition work to be done early in the life of the mine. If the data were available to confidently interpret the limits of the orebodies, then there would not be the need to postpone production or re-access these extensions to the deposit for production, as these peripheral areas would have been mined as part of the main deposit.

The whole mining cycle, from geology to production, has been affected by the lack of data and therefore the reliable interpretations for areas adjacent to defined ore reserves. At great expense and effort, the situation is being remedied. The adjustments made to the production schedule have compromised the amount of work able to be completed in other parts of the mine. Production is being scheduled very close to the completion of development resulting in very little time for any new data to be included in the interpretations for stope designs. This can have serious implications for the quality of the bench designs resulting in falls of ground and excessive dilution.

The mine geologist and mine management need to be aware of the effects of not gathering sufficient data to fully understand and delineate the geology of a deposit. In the interests of fully exploiting a deposit, money and effort spent in the early stages of development of a mine will save enormous costs involved with re-accessing and rehabilitating old parts of the mine.

Taylor, N. and Dennis, B.. 1993, The Contribution of Geology to Achieving Mining Performance at Hilton Mine. International Mining Geology Conference, Kalgoorlie WA. 103-113.