Stawell has a rich history of mining. Gold was discovered some 150 years ago as an alluvial deposit in the aptly named nearby Pleasant Creek. Subsequent exploration in the shadow of the windlass yielded the discovery of a significant high grade underground deposit which provided the substance on which the community of Stawell was founded.

Some 150 years on mining and exploration continues; progressively yielding new resources. The geological environment still exudes the potential to yield a significant discovery, which will further rejuvenate the field and elevate its status as a significant Australian gold producer.

Mining Project Investors Pty Ltd (MPI) is a private exploration and development company based in Australia. Stawell Gold Mines Pty Ltd (SGM), a wholly owned subsidiary of MPI, is the manager of a joint venture between MPI Gold Pty Ltd and Pittston Mineral Ventures of Australia Pty Ltd which operates the Stawell Gold Mine and conducts exploration on surrounding tenements. 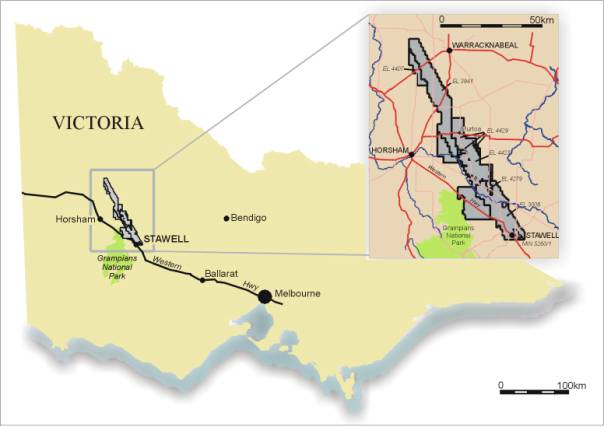 The current mining operation is based on the Magdala Decline Mine, which was commenced in 1981 and has now reached a depth of 950m below surface.  In addition the Wonga mine was commenced in 1984 as an open cut on near surface ore structures within the contact aureole of the Stawell Granite, approximately 2 km south of Magdala. A decline was commenced from the bottom of this pit in 1985 and, except for recovery of a few remnant ore blocks, is currently inactive.

The unique structural and geological setting of the Stawell gold deposit and the intense deformation of the volcanic and sedimentary package is a direct result of the complex history of the western margin of the Lachlan Fold Belt. East west compression of the Lachlan Fold Belt during the Ordovician against the Pre-Cambrian Adelaide Fold Belt has uplifted a thrust-stacked sequence of multiple basalt flows and sea floor volcanogenic sediments from the base of the stratigraphic pile (Fredericksen and Gane, 1998). The “Stawell Corridor” between the Coongee Fault and the Moyston Fault represents a structural high within this sequence, associated with over 6 million ounces of gold endowment (Stawell and Ararat) along the exposed 50 km strike length.  The belt is obscured by Tertiary basalt cover south of Ararat and by Murray Basin sediments to the north of Stawell.

Ore from the Magdala mine is produced from a series of sub-parallel lodes hosted by faults and shear zones on the western flank of a large basalt antiform “the Magdala Anticline” (Figure 2).  These lodes, the most important of which are Central lode and the Basalt Contact lodes, are intimately associated with an intensely deformed package of volcanogenic sedimentary rocks. Historical production as previously discussed was predominantly from high-grade “Hangingwall Reefs”, hosted by the Stawell Fault in psammo-pelitic rocks stratigraphically overlying the volcanogenic sediments.  The Stawell Fault is a large regional scale reverse fault, which locally forms the contact between the footwall “Mine Schist” and the hanging wall “Wonga Schist”.

Mineralisation within the Magdala mine is related to a regional tectonic event termed D4 by Watchorn (1986). The major structural event related to D4 other than the Basalt anticlines is the development of the Central lodes shear system (striking at 330o-340o and dipping 50o-80o SW) which overprints earlier D1-D3 events. The Scotchmans Fault and South Fault are both D5 and effect offsets in the mineralisation. Ore shoots developed within the Magdala Lodes generally plunge steeply north, but are constrained within a moderate northerly plunging corridor bounded by the Scotchmans Fault and the South Fault (Figure 3).  It is within this corridor that all recent production activity has been focussed and a significant portion of the resource inventory gains achieved. 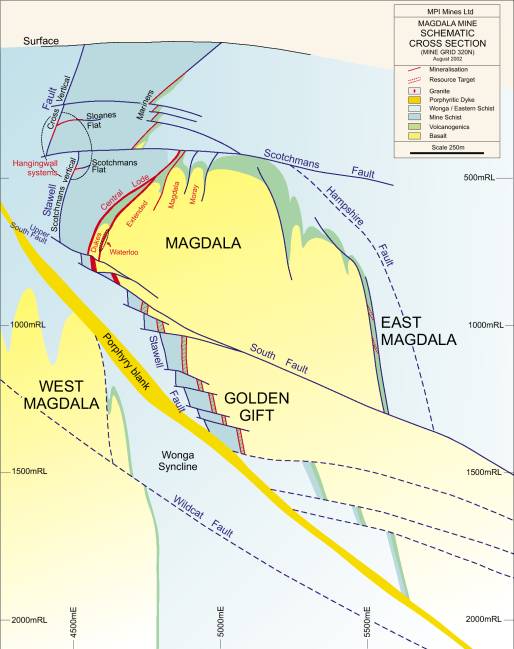 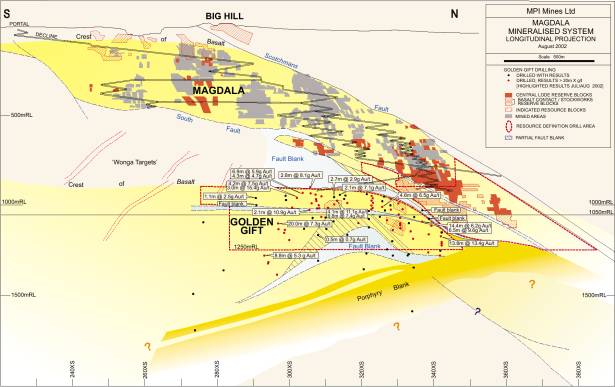 Mine Exploration and Resource Drilling

Since 1992 exploration and mine development at Stawell has added some 1.9 million ounces to mineral inventory.  This has predominantly come about by systematic exploration and resource drilling in the Magdala down plunge areas.

In 1997 and 1998 an extensive drill program across the top of the Magdala resource identified a potential open pit resource of some 215,000 ounces of gold. This resource comprised the up dip projection of the Magdala mineralisation along with material to the North of Scotchman’s fault in the Mariners environment. During 2000 SGM sought approval to extract a near surface gold resource by open cut methods from Big Hill, a topographic high point adjacent to the town of Stawell. Mining and restoration of Big Hill was planned to provide supplementary production during the transition between the present mining areas in Magdala and the build up of production in Golden Gift.

The Minister for Planning did not accept the Environmental Effects Statement Panel recommendation and rejected the planning application.  As a result, there are no current plans to mine the Big Hill and it remains a resource.

More recently exploration advances have been made below the South Fault in the Golden Gift zone. Since the beginning of the modern era of mining at Stawell several episodes of structural targeting investigated the possibility that the South Fault truncated a much larger Stawell orebody and that the remainder of the Magdala system (lower block) lay unseen either to the east, west, or at depth. Previous geological work should be acknowledged as it provides a strong structural framework upon which recent conclusions are based.

Early drilling tested the area under the South Fault at the south end of the mine, without success. It was concluded that the lower block either did not exist or lay at great depth.

Several factors combined to revitalise interest in the “Below the South Fault” concept.

ii) Critical underground exposures of the Magdala System truncated by the South Fault were only recently exposed. Examination of these exposures has allowed a detailed structural analysis of the kinematics of the South Fault to be carried out.

iii) The mine had reached 750m below surface and recent engineering studies indicate that it is feasible to extend the decline mine to below 800m depth.

Detailed structural studies on the underground South Fault exposures by University of Melbourne researchers indicate that the South Fault and related structures evolved from a north over south (along strike) movement sense to a northeast over southwest (across strike) movement sense. Depending on the relative degrees of movement, it was concluded that the deeper basalt (lower block) should lie under, and to the north of Magdala system as we know it.

Magnetic modelling, combined with re-construction of the movement history of the fault, allowed a best case scenario for the position of the lower block to be constructed.  Diamond drilling to test the concept was commenced in June 1999 on cross section 320N with success in the 2nd hole of the program.  Drilling has now outlined a zone of mineralisation over a strike length of more than 1,500m and a vertical extent of 350m.  As at 30 June 2002 diamond drilling had defined an Inferred Resource of 1,9Mt of 7.0 g/t Au, containing 434,000 ounces of gold in the northern part of the Golden Gift zone. Diamond drilling continues to infill sections to the south, and it is expected that further resources will be defined.

Acquisition and interpretation of detailed magnetics (and gravity) data by the JV in 1997-98 enhanced several previously tested regional targets, including potential Stawell-type basalt targets at Wildwood and Glenorchy, under the Murray Basin sediment cover. In addition, these data confirmed the capacity of the magnetics to define new targets under Murray Basin sediments north of EL 3008 (Figure 1).  Geological mapping by the Victorian Geological Survey has assisted the JV to develop a much better understanding of the regional geology of Stawell and produce interpretations of extensions of the Stawell Belt to the north. Additional regional magnetic and gravity data have now been acquired (from DNRE and private surveys) covering the region from Ararat to north of Dimboola. Interpretations of these detailed aeromagnetic and gravity data indicates that the Stawell corridor continues north under Murray Basin sediments and repetitions of the Stawell geological setting are evident over at least a 100 kms strike length northwest of Stawell. To date 13 Magdala style targets have been identified, to a northern depth limit of 150m of Murray Basin sediment cover.

Exploration in the near mine environment begins with a sound knowledge of the existing geological setting of the ore body.  Research has played and continues to play an important part in exploration targeting.

SGM and MPI have been significant supporters of geological research in Western Victoria. SGM is currently funding a second ARC SPIRT program administered through Melbourne University, aiming to develop a detailed understanding of the stratigraphic and structural nature of the Magdala system and the controls on development of major ore shoots. The project is building on the structural models developed in the previously research project.

MPI has also recently become a major sponsor of the CRC for Predictive Mineral Discovery with Melbourne University and the CSIRO.  This program aims to create realistic models of the sub-surface geology and fluid flow history of the Stawell Belt at various scales in order to develop and refine methodologies for ore-body targeting and help predict the location of major ore deposits.

Aside from the jointly funded research activities SGM and MPI have undertaken a major geochemical finger printing exercise of the Magdala and Wonga deposit, experimented with a form of calcrete sampling, investigated and tried other remote airborne survey methodologies. These have all been applied in an attempt to reduce time and cost of discovery.

In order to rank all exploration projects from grass roots through to resource drill programs a series of “sub-JORC” resource classification categories have been adopted. These can be used for identifying relative levels of expenditure and for demonstrating project growth during the course of exploration programs

· A confirmed target has the appropriate geophysical, geological and geochemical characteristics to warrant further work.

· A scoped target will have been drilled to a sufficient density to broadly outlilne the geological setting and confirmed the presence of ore grade mineralisation. Follwong conceptual studies targets which provide the potential to support economic production will progress to further drilling

The terms are used for internal planning only, as they do not comply with the JORC Code.  This approach is used to ensure sufficient generative and exploration target development is undertaken , to sustain future mining operations, by progressing from exploration to inferred, indicated and measured resources.

In addition to developing this approach for target ranking detailed geostatistical work has been completed, using conditional and non conditional simulation methodologies, to help quantify the risk (contained ounces) for the various resource categories. This work helped to determine the optimum drill spacings for the Magdala styles of mineralisation. Early in the Golden Gift delineation drilling programs this geostatistical work was coupled with several geological interpretations of the orebody to create a two-dimensional risk analysis on the contained gold delineated by drilling. For the Golden Gift area the greater risk was on tonnage defined using geological parameters, as opposed to grade defined geostatistically. Work such as this has helped to define the project risk, and to determine the amount of drilling required to lower project risk to acceptable levels, before making major capital commitments.

The head frames at Stawell are very old and all but gone, however exploration in and around the mine environment continues. The Stawell Goldfield has a history of 150 years of exploration and mining activity that includes significant past production and delineation of a large identified resource. Despite this there is potential to add substantially to this sizeable resource

SGM funded research has increased understanding of the unique geological environment at Stawell and this in turn has enabled the resource-base to be expanded. This activity also played a significant part in developing a regional exploration program to target similar geological environments under cover.