The sharp decline in Australian minerals exploration raises the question of where the next generation of orebodies will be found. They will undoubtedly be hidden; either concealed beneath cover or have such cryptic signatures that traditionally used pathfinders do not work.

The recent discoveries of world class concealed orebodies (Olympic Dam, Cannington, Century) were largely the result of a multidisciplinary approach integrating the latest in exploration concepts and new technologies. We argue that the drivers for discovering the next generation of concealed orebodies will be similar and result from the application of the next generation of new technologies and integration and interrogation of these results in collaborative visualisation environments. However, an improved holistic understanding of earth processes will be required, which in turn will define better levels of precision needed for the instrumentation of the new technologies (eg. gravity, gradiometry, isotope fingerprinting). This will also provide in turn, quantitative levels of precision on sampling which will help alleviate the practice of uncontrolled and unnecessary data collection.

In order to drastically reduce the cycle time of discovery, integration of these technologies will require sophisticated information management and visualisation systems and smart datamining/datafusion techniques to ensure knowledge, not just data, comes from the integration process. In the talk we will show examples of state of the art data integration and visualisation of disparate data collected and processed from multiple sources.

The sharp decline in global minerals exploration, and in particular within Australia, has once again raised the spectre of where the next generation of orebodies will be found and what will be the drivers leading to their discovery. The severe downturn in the industry during 1998/1999 has inevitably led to many geologists contemplating smarter ways to do exploration and thereby reducing the cost of discovery. It is also relatively certain that such discoveries in Australia will be hidden; that is either concealed beneath cover or have such cryptic geochemical signatures at surface to render traditional pathfinder vectors useless.

We ponder the question if, as explorationists, we have been successful at exploring for concealed orebodies, and why we have collected such huge amounts of data at a crustal scale, yet we have found relatively few next generation discoveries; put another way, why we have little correlation between the volume of data gathered and any measure of exploration success? Could it be that much of the data collection was ill-judged, data for data collection sake with very little foresight as to the precision of data required to define anomalous populations?

We pose the tenet that the more recent discoveries of world class, concealed ore bodies (eg. Olympic Dam, Cannington, Century) were largely the result of a multidisciplinary approach (viz, Woodall 1994, Whiting 1997) integrating the latest in exploration concepts and new technologies.

We also raise the bar and speculate that the next level of discoveries will, like the last, be the result of integrated multi-disciplinary studies, but to do so we will need a better holistic understanding of earth processes and therefore definition of the levels of precision required for instrumentation. We will also need to integrate this data rapidly in 3 dimensional information management/visualisation environments in order to severely reduce the lead time of previous successes such as the 19 years for Olympic Dam (Woodall 1994).

Why do we make such a statement? Broadly, the answer lies in looking at results from previous resource booms where quantum leaps in discoveries arose from:

The next generation of drivers have been enunciated in CSIRO, Exploration and Minings Glass Earth concept. The Glass Earth will present a suite of technologies, most already at advanced stages of development, to render the top 1km of the earth transparent. These technologies include (Figure 1):

· coupled modelling of deformation and chemical, fluid and heat flows in the rock and overlying regolith.

As well as providing direct detection of mineralisation, development of these technologies will start to provide quantitative levels of precision on sampling which will help alleviate the practise of uncontrolled and unnecessary data collection.

A Measure Of Success

There are widely held, divergent views amongst the exploration, mining and resources management communities as to whether exploration for hidden orebodies, particularly within Australia, has been successful or not. Firstly we should define the concept of hidden as those envelopes of economically mineable mineralisation which are concealed beneath cover or those which have such cryptic geochemical signatures at surface to render traditional pathfinder vectors useless. The former types of concealment more than likely point to geophysical or conceptual fingerprinting, whereas the latter may be discovered using the range of chemical mappings. We also raise the spectre of asking whether, unless resource management can be assured in advance that a terrane will host an orebody of a given commodity/commodities, do blind orebodies of unknown commodity represent realistic commercial targets? Obviously we as explorationists would be thrilled to be associated with any blind discovery. But will the same thrill be imparted to a manager looking down the barrel at hundreds of millions of dollars in drillout and feasibility costs before he/she knows they have a viable project on their hands?

How do we gauge or measure success in terms of looking for hidden orebodies? Clearly WMC at Olympic Dam (Woodall, 1994) and BHP at Cannington have been successful, yet is that measure of success based on the fact that they found a world-class orebody? If they have respectively found the only world-class orebodies in Gawler Craton/Stuart Shelf or the Eastern Succession in the Mount Isa Block, then both companies have clearly been extremely successful. However, if there are many more such orebodies still to be found in both camps then we might argue success is very measured and they have only been marginally successful. Maybe the Glass Earth will provide us with the answer to this conundrum which remains in the imponderable basket at present and as a contentious issue amongst explorationists and managers.

We will not comment on the range of technologies included in CSIROs Glass Earth concept as they are covered elsewhere in this symposium (Carr, this volume). However, we want to address the integration of these technologies into an environment where all the data can be easily viewed and managed.

The advent of computerisation and the digital manipulation of data in the minerals resource industry has led to the development of a significant number of sophisticated software programmes for data manipulation and modelling. Generally these programmes fall into two classes (Archibald et al, 1997); Geographic Information/Image Processing Software Systems which are essentially 2 dimensional in data handling but have good spatial query functionality; and mining/modelling software which is largely 3D CAD-based with limited GIS type query. Unfortunately because of their very different underlying data/domain models, the two classes have limited communication links (interoperability) between one another. Hence for integration of the next millennium of exploration technologies, a fully 3D spatial information system (3DGIS) with good visualisation is a prerequisite.

Fractal Graphics is currently developing, through its FracSis programme, a 3D spatial information system (3DGIS) with extensible visualisation from conventional monitors to virtual environments. The system utilises an object-oriented database and is based on a 3D datamodel developed by CSIRO under AMIRA Project P467. The system has advanced visualisation (FracViewer v.2.0) capable of handling multiple formats of disparate data. In this talk we will demonstrate the power and capabilities of such a system and show how integration of technologies developed through a Glass Earth has potential for focussing exploration in the next millennium. This demonstration illustrates that although the Glass Earth is designed to render the top 1km of the crust transparent, many of the orebodies may have their origins significantly deeper at lower crust/upper mantle levels, and that new explorers will surely need the facilities with ability to handle 3D seismic, 3D potential field data, isotope data, heat flow data as well as the range of data sets more normally associated with exploration (surface sampling, drillholes etc.).

We conclude that the next generation of hidden orebodies will largely use an integration of multidisciplinary techniques that led for example, to the discovery of Olympic Dam and Cannington. However the techniques will use much higher levels of precision, and detection of anomalies will be based on sophisticated physically coupled models simulating deformation and chemical, fluid and heat flow in rock and overlying regolith.

Interpretation and interrogation of results will be conducted in collaborative visualisation environments where sophisticated information management systems will integrate multidisciplinary data sets and allow for datamining whereby knowledge, not just data, becomes available from databases. Whilst many techniques may concentrate on highlighting the geometry of mineralised envelopes and rendering the host rock transparent, many other techniques will simulate and fingerprint the processes leading to mineralisation, thereby providing better vectors to the cryptic signatures which lead to the discovery of blind ore systems. We should therefore be able to more clearly define the precision needed in spatial sampling and hopefully, be better placed to quantity success in the context of exploration for hidden orebodies.

To all our colleagues in Fractal Graphics, CSIRO and industry who have contributed to the debate on the future, hidden orebodies, etc.. 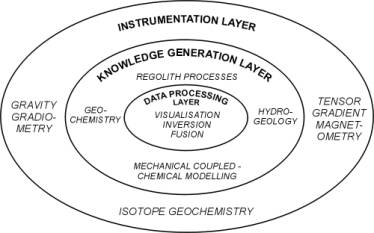 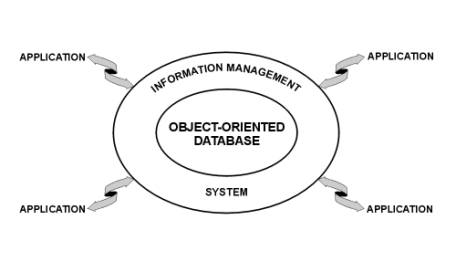