The Nifty Deposit lies in the Paterson Province in the Great Sandy Desert 1250 km north of Perth.  The Deposit lies in the Yeneena Basin, a poorly dated region of the Neoproterozoic formed between 1000 –750 Ma that was inverted in the Miles Orogeny at ~ 600 Ma. 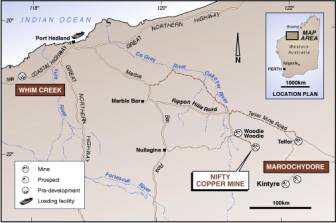 The Nifty deposit is a sediment-hosted copper deposit containing in the drilled region over 2 million tonnes of contained copper.  The Resources and Reserves are:

The mineralisation is hosted in a strongly silicified black shale sequence called the Nifty Member.  The ore horizon contains coarse chalcopyrite in massive and laminated layers within a thick envelope of intense silica replacement forming a unit up to 100m thick.

The alteration intensity varies with total silica chert replacement in the core of the synform and in the current open pit on the northern limb.  The intensity wanes to the south, west and east becoming a bedded parallel layering with silica dolomite alteration on the margins. A lead-zinc horizon overlies this silica alteration with a pyrite-silica zone with elevated cobalt beneath.  The high-grade copper core has associated intense alteration forming lozenge-shaped zones on a variety of scales throughout the alteration system. The alteration and mineralisation is strata bound but crosses stratigraphy in areas.

The deposit is analogous with many major regional sediment-hosted copper provinces such as Mount Isa, Zambia and the Kupferschiefer in eastern Europe.  The mineralisation is thought to have been emplaced by high temperature reduced fluids with associated silica alteration during basin inversion (Anderson et al, 2001).  The Telfer deposit is also believed to have formed at a similar time during basin inversion in the Miles Orogeny (Rowins, 1998). 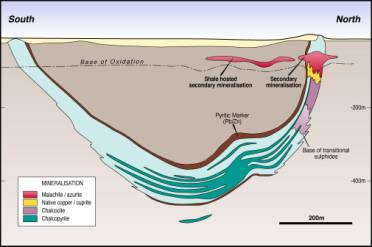 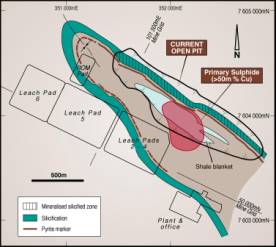 The Nifty deposit was discovered during regional reconnaissance of the Paterson Province looking for Zambian style mineralisation (Haynes, 1993).

Orientation and regional studies demonstrate a strong regional geochemical halo surrounding the outcropping mineralisation in the surface ‘lag’ samples. The lead and copper are the most distinctive anomalies although detailed analysis has defined a broad anomalous signature.

A variety of geophysical surveys have been used over the deposit and regionally. The detailed aeromagnetics show the deposit to lie within a magnetic low corridor interbedded with strongly magnetic pyritic black shales.  Airborne electromagnetic surveys show the stratigraphy to be strongly conductive indicating graphitic and carbonaceous black shales.  In detail the ground EM shows the mineralisation to be a resistive zone.  This is considered to be due to deeper weathering along the silicified Nifty Member causing the localized resistor.  The primary mineralisation can not be distinguished in the EM due to the conductive nature of the host rocks with modeling indicating depths of less than 200m can be seen in the conductive material.

Straits (Nifty) Pty Ltd holds a large mining lease that covers 40 km of strike surrounding Nifty and an area 60 km to the north covering the Warrabarty deposit. Straits has claimed a large tenement holding in the region covering over 6,000 sq km and covering a 140 km length of the basin margin with shallow cover.  These areas have now been granted and the majority of the region cleared with Heritage Surveys.

Straits exploration programme will focus on

A multi-pronged attack over a number of years is required to test these priorities. This will constantly evolve depending on results and on priorities with an ongoing commitment required to discover a new orebody.  High priority is placed on targets near the current operation:

In the Shadow of the Headframe

The Nifty alteration system is not closed although lower uneconomic grades have been intercepted at the margins with the current drill spacing. The style of the mineralisation is a series of 3-D lozenges that thicken and thin from hand specimen to deposit scale.  Two thick lozenges are currently known comprising a) predominantly the open pit deposit and b) the core of the underground deposit with a thinned zone of weaker mineralisation between.  There is every expectation that further lozenges exist especially to the southeast and down plunge.

The closest analogue to Nifty is at Mt Isa which contained a number of repeated bodies from the original ‘Black Rock‘ open cut to the current Enterprise ore body over 1.5 km below (Waring et al, 1998).  Only two holes have been continued to depth at Nifty and both have intersected high-grade copper in altered zones.   Potential for these to increase to a substantial lens is high especially as neither hole has penetrated the base of the alteration sequence.

Targets on the Mining Lease

Previous exploration has focused on discovering further reefal facies along the stratigraphic strike of the orebody.

The improved understanding of the deposit has highlighted the importance of the 300 structure and the potential for further copper accumulations along the structure.  This has highlighted the potential for the Bloodwood region closer to the Coolbro Sandstone and basin margins.  The prospect is highly anomalous geochemically from the regional lag sampling and has had very limited drill testing.  Although the area is shallow it is covered by sand and Quaternary channels that can mask a deposit. Structurally controlled copper deposits occur in clusters at various levels within the system. 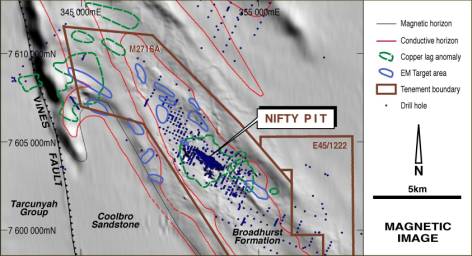