The Didipio Project occurs within a Miocene alkaline volcano-plutonic complex, located within the Mamparang Mountains of north Luzon, Philippines. Exploration by Climax Mining Ltd has identified numerous copper-gold occurrences within the project area and extensive drilling of the Dinkidi deposit has defined a geologic resource of 121Mt of 0.97 g/t Au, 0.39% Cu. The mineralisation is hosted by a series of hydrothermally altered and vertically telescoped alkaline intrusives and at depth, high grade gold values (>10g/t) are associated with late stage, structurally controlled pegmatoidal breccia zones.

Climax is currently conducting a feasibility study for the development of Dinkidi as a 2Mtpa open pit operation producing some 100,000oz of gold and 15,000t of copper in concentrate annually.

Didipio is located near the boundary of Nueva Vizcaya and Quirino Provinces on the island of Luzon approximately 200km north of Manila, Philippines. Situated within the Mamparang Mountains at an elevation of 700m, the area has a mild tropical climate with an average annual rainfall of about 3000mm.

Didipio was first recognised as a gold province in the 1970s when Ifugao panners discovered alluvial gold and excavated over 20 tunnels into Dinkidi and nearby prospects. Limited alluvial mining is still being conducted near Dinkidi.

In 1994, Climax was granted a Financial or Technical Assistance Agreement (FTAA) by the Philippine Government. The FTAA contract, which has a term of up to 50 years, provides Climax the exclusive right to develop a large-scale mining operation.

Climax conducted an airborne magnetic survey and detailed regional geochemistry programs that have identified numerous copper and gold occurrences and targets. Exploration within the Didipio valley led to the discovery of the Dinkidi gold-copper deposit and a number of nearby prospects.

From 1996 to 1998, Climax completed several engineering investigations, which culminated in a positive study based on a 2Mtpa underground block caving operation. An Environmental Impact Statement (EIS) for the project was submitted in 1998 and various government agencies then conducted numerous reviews and public meetings. The Environmental Compliance Certificate (ECC) was granted in 1999 and an amendment was approved in 2000, however due to the political uncertainties at the time and continued weakness in metal prices, the financing of the US$138 million block caving operation was halted in early 2001.

In April 2003, Climax appointed new company management, which had recent experience in the development of several Southeast Asian mining projects. Subsequently, a feasibility study for development of Dinkidi as an open pit operation was undertaken and results of this study will be available during the September quarter 2003.

Didipio occurs within a Miocene alkaline volcano-plutonic complex, localised by splays of the Philippine fault. The intrusive complex comprises a series of intrusives ranging from early stage diorite and gabbro to later monzonite, which have intruded clastic trachytic tuffs and flows (Wolf et al, 1999).

Dinkidi is characteristic of those gold-rich copper deposits that are related to potassic (high-K) igneous rocks, where the host rocks generally have the following distinguishing features (Muller & Groves):

The deposit measures 500 metres x 200 metres near surface and extends over 800 metres vertically. The northern end of the deposit is truncated by the post-mineralisation Biak Shear. Dinkidi occurs within the more deeply eroded southern portion of the Didipio intrusive complex, which has been uplifted along the Biak Shear (Baker 1998).

Chalcopyrite and bornite are the principal copper sulphides, commonly occurring as fine disseminations, clusters and stockwork systems, particularly in brecciated zones. Pyrite is the other major sulphide, mostly disseminated and within fracture fill throughout mineralised zones. Minor sulphides include pyrrhotite, chalcocite and sphalerite. Gold is associated with the major copper sulphides and increases in grade with depth. The deposit is oxidised from the surface to a depth of about 30 metres.

Dinkidi is probably the main source of alluvial gold within the Didipio valley, however others (Corbett, 1995) have suggested that some alluvial gold deposits were derived from peripheral mesothermal veins and breccias.

To the northwest of Didipio, the less deeply eroded intrusives and volcanics are considered prospective for alkali-type epithermal gold mineralisation (Baker, 1998).

Potential exists to increase the Dinkidi resource by exploratory deep drilling, which will probably be undertaken from underground when access is available.

Primary ore treatment will be by means of a conventional concentrator, which will produce a high grade sulphide copper concentrate (30% copper) containing both gold and copper metal, as well as gold doré bullion (>40% of gold production) extracted by gravity recovery methods. The concentrator will recover up to 96% of the gold and about 95% of the copper. The concentrate will be transported for onward shipment to facilities for smelting and refining, whilst the doré bullion will be available for direct banking. Oxide gold ore will be processed by gravitation methods however no copper will be recovered.

Although previous engineering studies indicated the viability of a 2Mtpa block caving operation, Climax was faced with the challenge of raising finance for the US$138 million development. As a junior mining company, Climax found this a difficult task as the project required a 2 to 3 year development period before it generated any positive cash flow. The situation was worsened by weak metal prices and political concerns, which existed at that time. Attempts to finance the block caving operation were halted in early 2001 and the project was subsequently mothballed.

In 2003, Climax appointed new company management, which had experience in development of Southeast Asian mining projects. The new management reassessed the Didipio project and identified potential to develop Dinkidi as a 2Mtpa open pit operation (Figure 3) producing some 100,000oz of gold and 15,000t of copper in concentrate annually. Compared with the previous block cave mining proposal, development of the open pit operation would require significantly less capital expenditure and positive cash flows would be generated earlier. Mine life would also be extended to over 15 years. 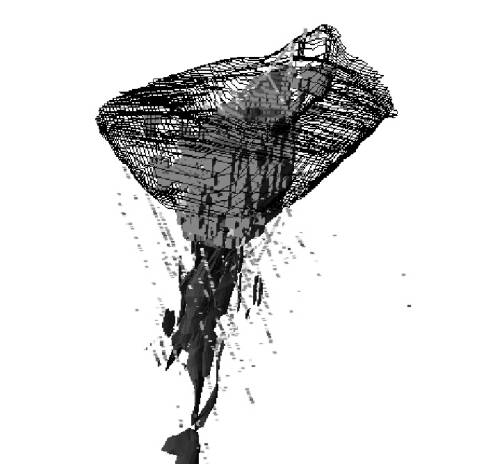 A feasibility study for this development is currently underway and results will be available in the September quarter 2003.

Previous inhabitants of the area were the Ilongots who were displaced by Ifugao migrants during the later 1900’s. Today, Didipio is a rather fragmented community comprising various tribal groups that originated from different parts of Ifugao Province. Maintaining their Ifugao culture is important to the community and although mostly Christian, some continue to practice ancient rituals presided by tribal priests or mombaki. There has been little intermixing between the Ifugaos with other Filipino cultures, as Ifugao children are encouraged to marry someone from the same region (Durnia, 1979).

Although there are some community concerns about the project, the majority of the population favour economic development as they identify the proposed mine as an opportunity for local job creation and improved education facilities (SRK, 1999). The project will also increase demand for local agricultural produce and road improvements will aid the transport of cash crops to distant markets.

The development of Didipio is poised to revitalise the Philippine mining industry through the integration of advanced engineering practices, consideration of the local community and sound environmental management.

The authors would like to thank Climax Mining Ltd for permission to publish this paper and the dedicated employees, consultants and others that have worked to advance the project. Further acknowledgement is given to the people of Didipio for their patience and support.